Sorry for the delay – Christmas was busy/hectic as was New Year and it’s taken some time to get back and settled into homelife again and that’s not a subdued affair either. So I’m only just getting round to posting up images of the pre-christmas jewellery workshop I did with family that I mentioned on Facebook – so you may already be aware it happened, but not seen the results. Read on…

Gavin is Colin’s brother and he travelled all the way to Scotland from South Africa with wife Noleen for Christmas. We’ve not seen them in ages so it was a visit we were really looking forward to and they did not disappoint – we did lots of chatting, drinking, eating, film watching (and sleeping – ahem – Colin!), scrabble playing etc before heading down to Lincolnshire for a big Andrews Clan Christmas get together at Colin’s sisters.

The last time Gavin and Noleen visited us in Scotland, we were living in Aberdour, so they’d never seen our cliff top house in Kinghorn before. It was great to show them round and they had a very keen interest in my little Milomade studio at the front of the house and Gavin particularly salivated over my jewellery making tools and all the different types of pliers I had on display – honestly, men and tools = heaven!

One evening we talked a lot about the process of making jewellery and decided to have a day in the studio ‘playing’ and trying things out. However, I didn’t want them just to play, I wanted them to actually go through the process of creating a piece of jewellery and have a finished item by the end of the day – that way they would get to try out lots of different techniques and see the whole process of making something from scratch in context and have something to take away with them, rather than just doing a bit of sawing, a bit of filing and a bit of hammering.

The night before, Gavin was quite happy to just go with the flow and see what happened, but in the morning he had a definite plan and drew out a sketch of what he wanted to make. Noleen was a bit more relaxed about everything and just wanted to make a sea glass pendant and maybe a pair of earrings too, so I had all my locally sourced sea glass out for her to pick a piece for her pendant and Gavin selected a piece for his as well.

He drew a wee sketch and we talked about options and wrote a quick list of the processes we needed to go through so that he knew he’d be able to try out ALL my tools! 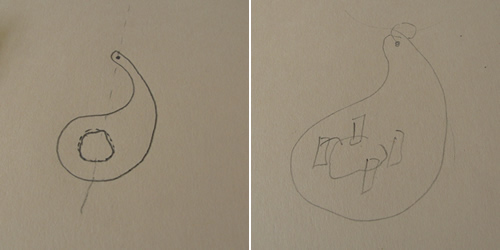 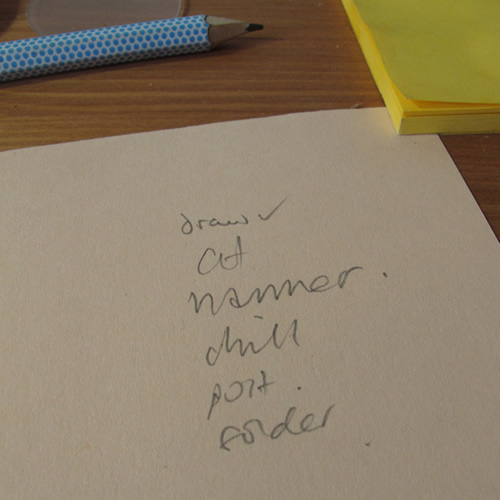 He then set about drawing out the piece onto a sheet of copper and cutting this out using a jewellers saw. You can see the piece of sea glass he selected for the pendant in the bottom left image. 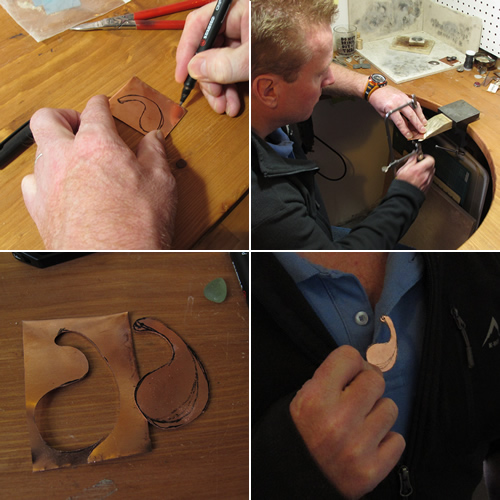 The next steps was to file down the edges and use micromesh to sand/polish the piece until it was smooth and shiny. 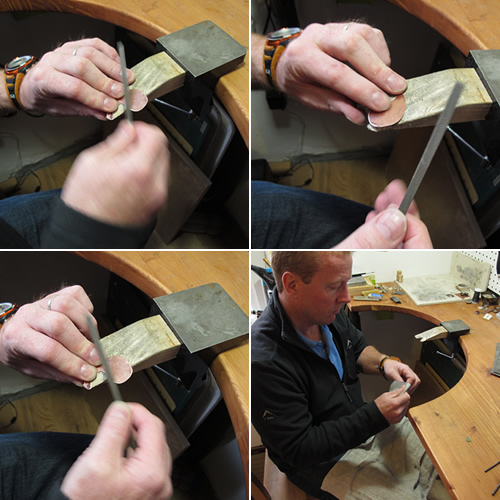 Next came the hammering to texture the piece… 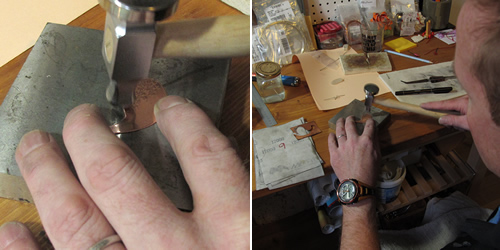 And then the drilling. We needed to drill two holes – one for the jump ring that the chain would go through and one as a pilot hole. We would thread the saw blade through this pilot hole and cut out a shape for where the sea glass would sit. We’d decided on this option after I showed them a brooch I made years ago using sea glass and copper. If the sea glass just sat on copper, it would look quite dull and dark, but if it sat over a hole in the copper, light would shine through it and brighten the piece up quite considerably. 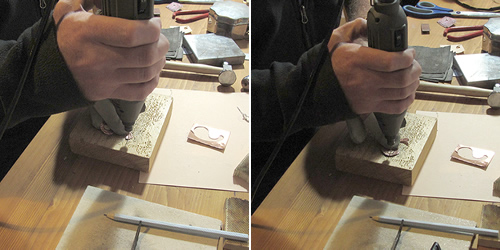 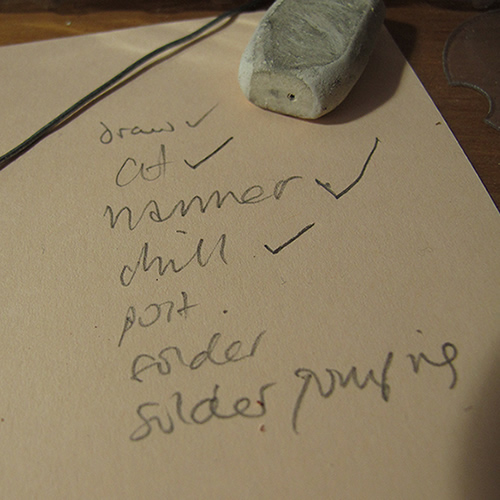 I forgot to take a photo of the hole cutting, but here’s Gavin filing and smoothing down the edges. 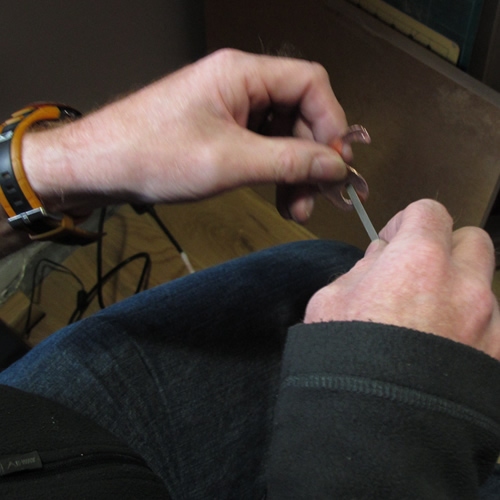 Next came the soldering. We decided on making three small hammered posts that would hold the sea glass in place. It was tricky as I’d not done any soldering for a while, but we got there in the end, even though our solder did flow in the wrong direction on one of the posts and took a few attempts. 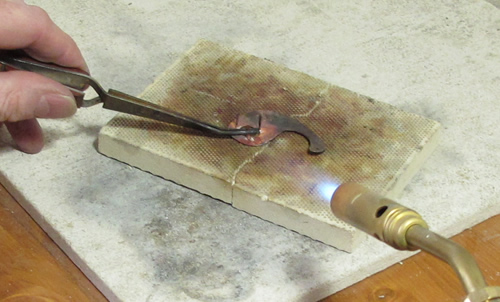 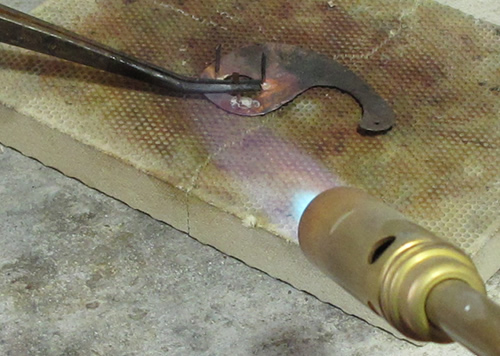 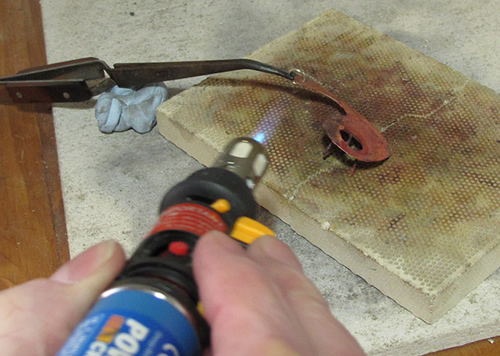 After a thorough polish it went stright round Noleen’s neck. 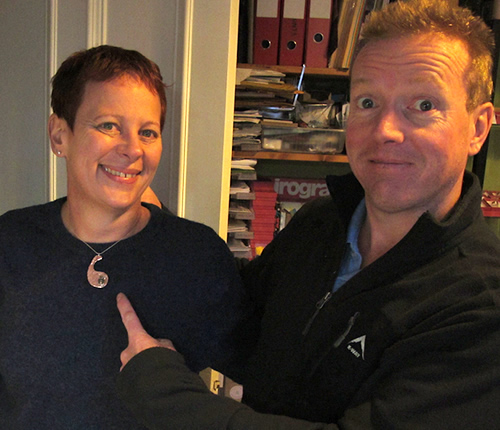 We weren’t happy with the solder flow, so we tried to sand/polish most of it away which was quite hard on a dimpled surface, so I suggested oxidising the piece as this would help to disguise it. 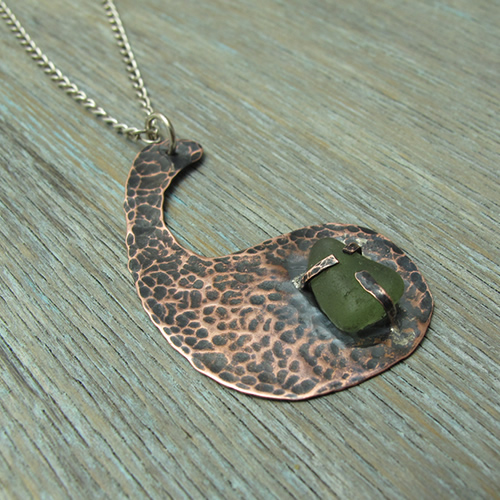 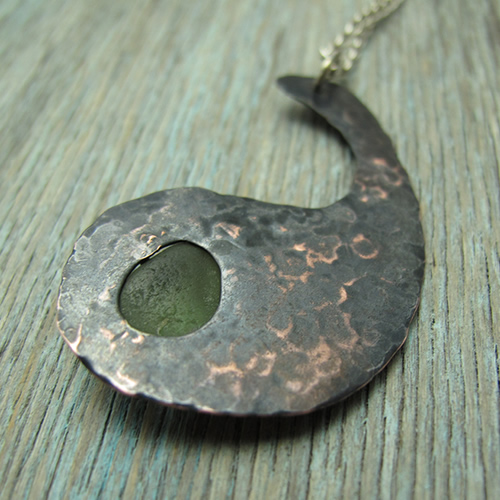 Noleen was keen to use recycled silver so I found some pieces from my scraps box to make the earrings out of and the sea glass pendant would be made from my new stash of Eco Silver from Cookson Gold.

We cut a length of wire and I showed her how to ball the ends of the wire, quenching in between doing each end. 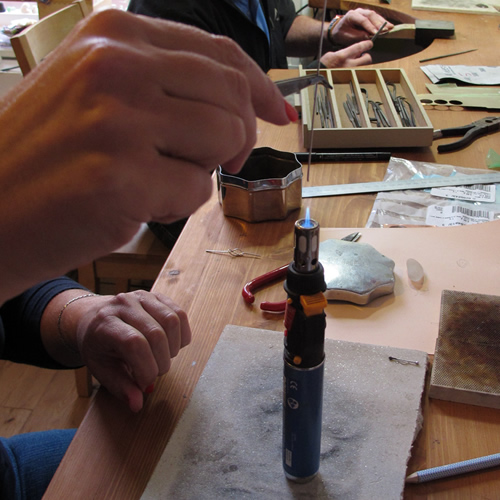 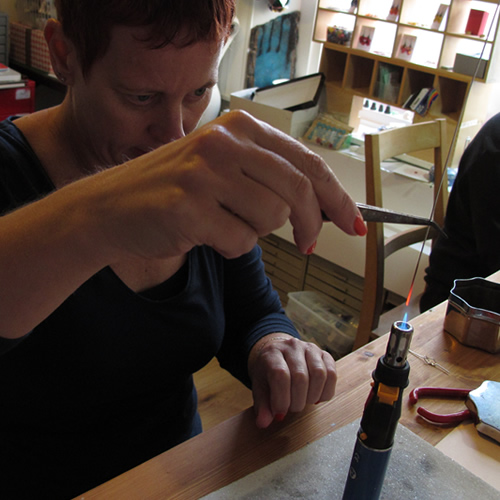 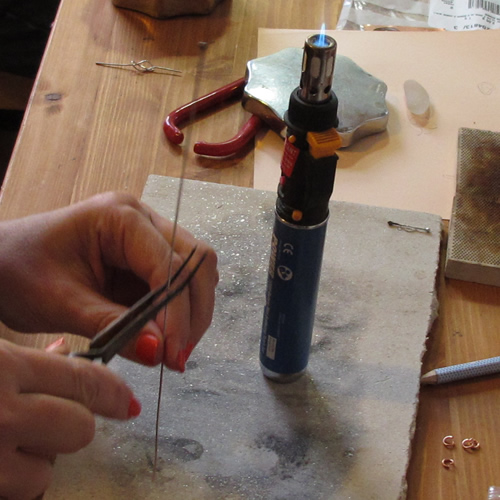 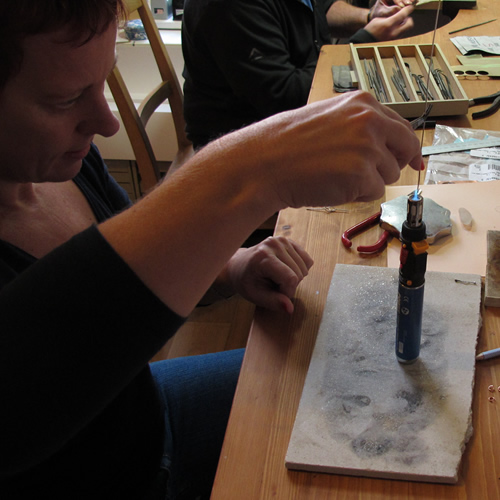 After balling each end of the wire, it went into my eco friendly vinegar pickle which would remove the firestain. 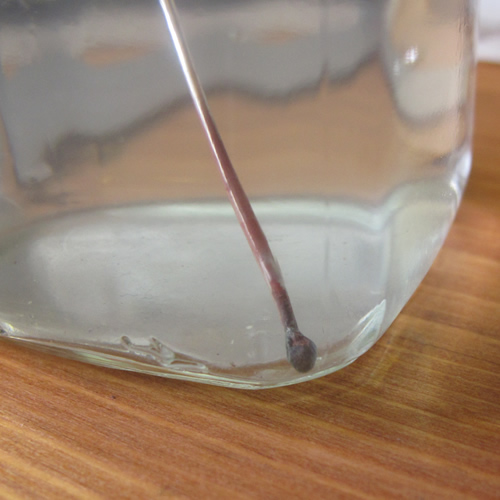 and while that was happening, Noleen got on with cutting out a couple of hearts from the scrap silver I had found her – with perfectly manicured nails I might add!!!

The possibility of chopped fingers…. 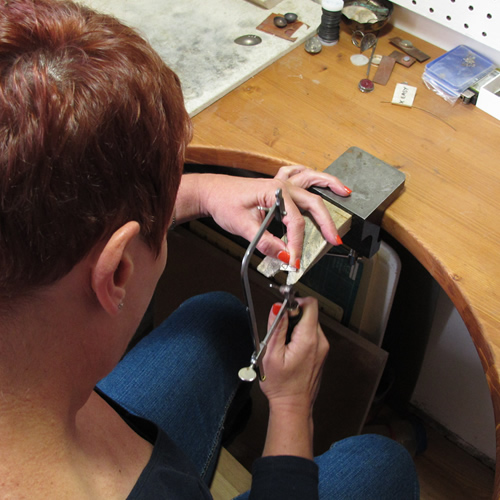 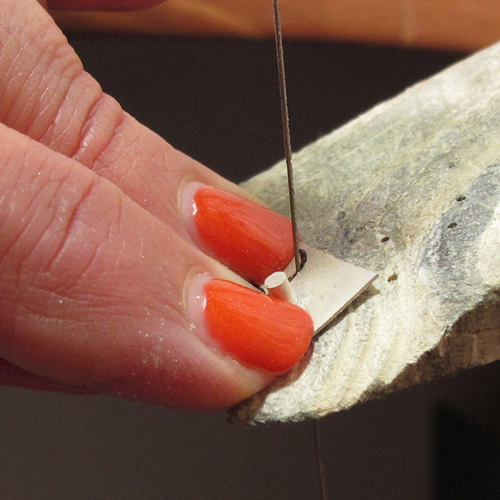 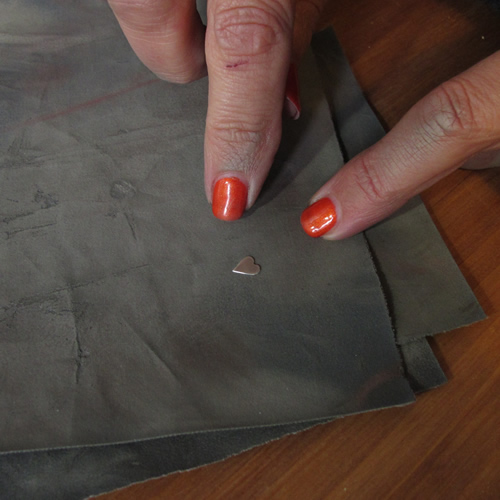 Unfortunately I forgot to take photos of the rest of the steps as we were having so much fun! But we domed the hearts a little before Noleen soldered on the earring posts all by herself. They then got a final polish before being popped straight into her ears – not sure she took them out all of Christmas!

We also worked together on binding the sea glass in wire – really love the final result! 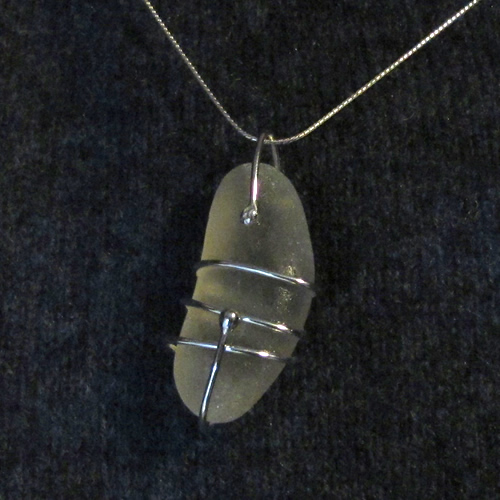 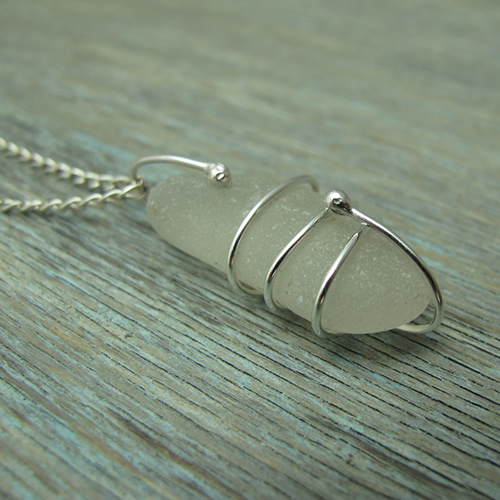 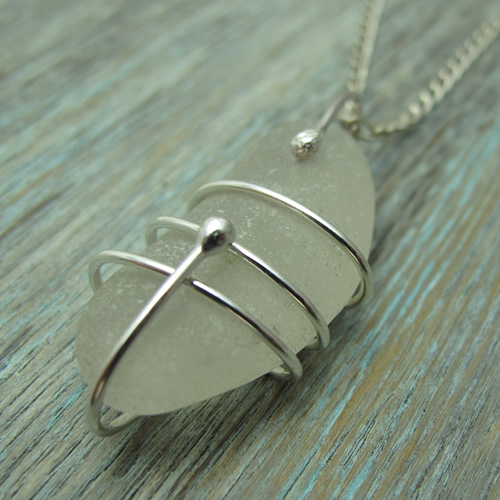 Not bad for a day of playing eh? I had a brilliant day and I hope they did too!