I’ve hardly had any time at the bench this week, but yesterday, afternoon while Milo was napping, I snuck in and finished off the domes I’d made in my jewellery class last week.

I say ‘finished off’ but to be honest this is just the start. I just had to file down the edges so that when joined together the two edges would be flush.

Doming had made the edges uneven in places so there was quite a bit of sanding to be done. It’s a matter of rolling the domes of copper around on sandpaper placed on the bench until they’re perfectly level, but you also have to make sure the domes have been evenly sanded as if one is taller then the other, it also means its slightly larger, so there’s lot of factors to consider.

Making lockets is more complicated than I imagined!

I’ve been reading this book and I’m a little disappointed. I’d heard that it was the bible with regards to lockets, boxes and hinges and even though its a great resource, the tutorial element is seriously lacking in detail and its not making much sense to me at the moment. Maybe in practice it’ll all become clear. Lots of gaps to fill in my knowledge so far.

I’ve opted to make a locket from two domed pieces of copper that incorporates a bearing plate that supports the knuckles of the hinges – at least I think it’s called a bearing plate. It’s going to be a lengthy process!

In my class tonight I pretty much spent three hours perfecting a curve! 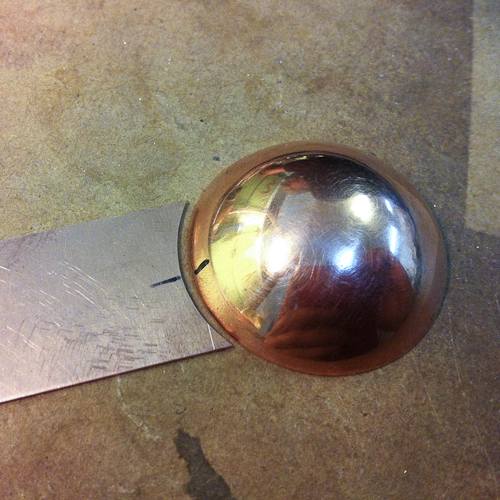 Really intense process of cutting and shaping the plate to fit the curve of the domed copper. After I’d got it perfect I then had to decide whether or not to bevel the edge so that it mirrored the dome exactly and I initially refused as I’d spent ages getting the curve flush to the dome. However a little reverse psychology from my tutor persuaded me to take the plunge. I almost gave up and started looking for alternative methods, but eventually with a little more guidance picked up the file and finished off one of the plates. Really impressed with what I achieved. 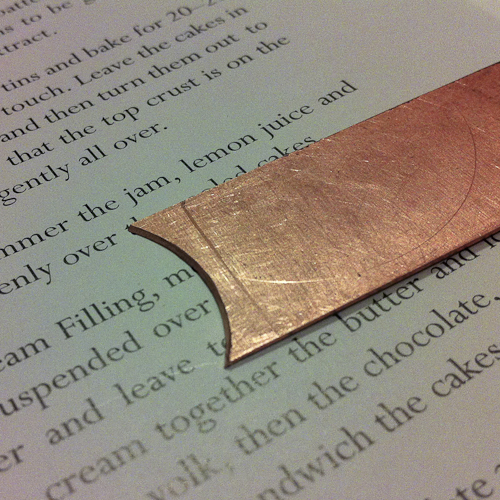 Next week I’ll be tackling the second plate which is already marked out and ready for cutting and filing.

Judging on how long it took me to get one piece done tonight, I may not get round to soldering next week, unless I get a chance to cut out the semi circle over the weekend – that way I’ll just have the filing to do in class and might make it to the soldering stage.

I’ve had so much to learn and consider with regards to the technicalities of making the hinges that I’ve not even given the decoration a thought…think this first attempt will just be plain polished copper.

Anyhow I’ve started a new Pinterest board called Lockets where I’ve gathered together a load of images and tutorials on hinges and lockets to keep me inspired. Take a look!

One thought on “The Perfect Curve…”