Having completed my domed copper locket, I’ve decided to try out a book type locket for my next project at SilverHub Studios in Edinburgh. In true Evie Milo style, I can’t keep things simple, oh no, I have to add in a bit of metal etching too, and not just a bit of simple experimental stuff, I’ve gone the whole hog and decided to use photographs! 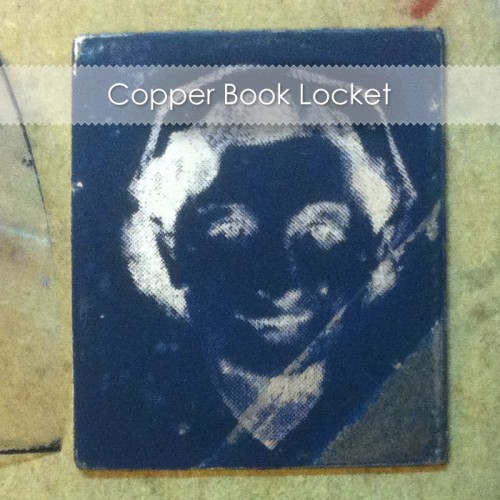 I’ve started out with the idea of having a three pages in copper – the inner front and back pages with have a portrait type photographed etched into the metal and the middle page will have an oval cut from it. I’m hoping I can texture the front and back covers of the locket using the rolling mill too.

I first cut out three ‘pages’ from copper: 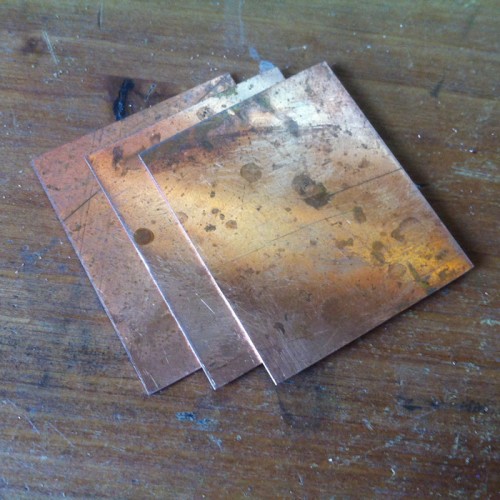 I ran these through the rolling mill with some textures and then filed and shaped them until they were the same. They ended up not perfectly square, but I like that.

Next was the choice of photos. I delved into my old photography work and found all the old family photos and negatives I used for my degree work and chose two portraits of distant relatives that I thought worked well together. I scanned them in and worked on them a bit on Photoshop to make them quite contrasty and took them to my class.

Unfortunately I’d remembered to reverse the images, but forgot to invert the clours, so when it came to printing them on to PNP paper and tranferring the image to the metal, I was left with the positive image and therefore after etching and oxidising, I’d be left with a negative image. Ooops! But I went ahead and tranferred the images to the copper as you never know, the results might be quite nice. This is all strangely taking me back in time to my photography degree and the kind of work I did at college and I kind of like that. 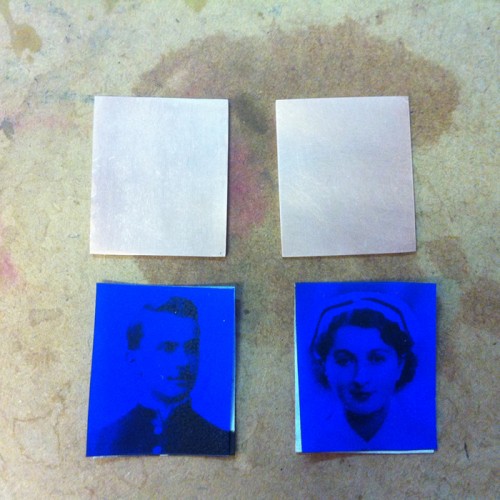 Here are the positive images on the copper… 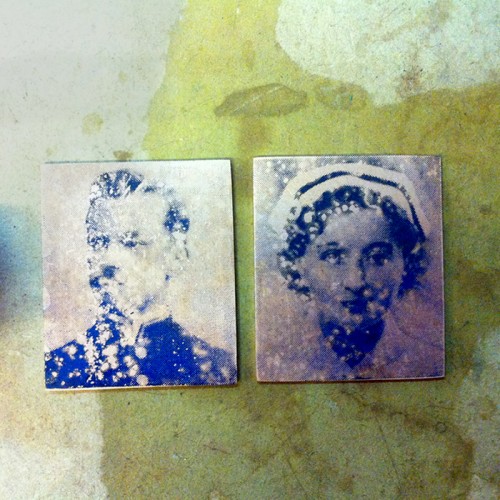 I wasn’t that disappointed by this mistake as I think they could look really interesting and also it gives me the opportunity to do a bit of a comparison.

I got the same images as before and this time inverted the colours to make them look like negatives and cut out some more copper pages decided to etch this set first. 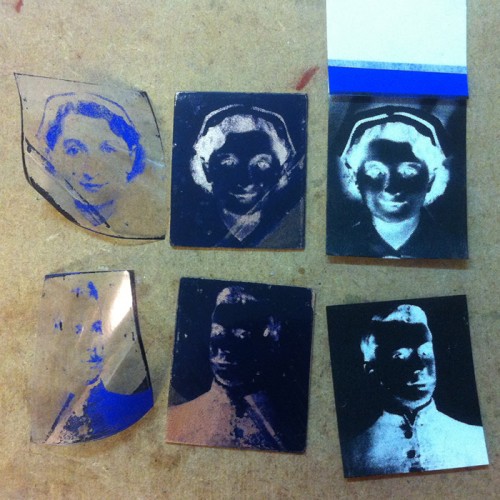 Here are the negative images on copper… 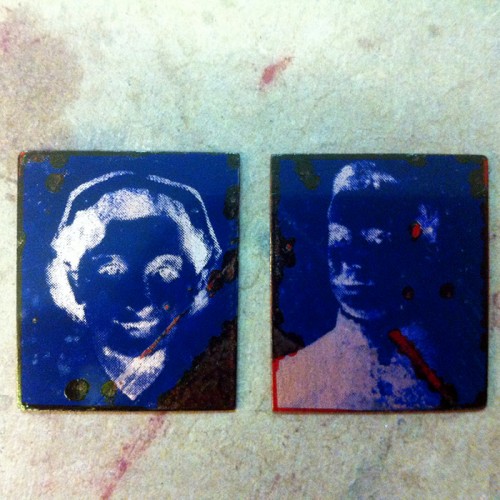 The red marks are from using a permanent marker to touch things up a bit here and there.

Here’s the middle page of the book locket, textured and pierced. 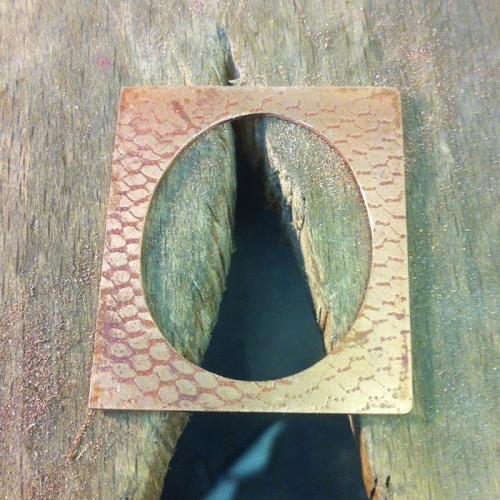 So that was where I left things a week ago.

This week I actually got to do the etching! It was extremely exciting as I’ve never done it before. We poured Ferric Chloride solution into a small tub and placed this into a larger tub which contained boiling water and acted like a warming bath for the acid to keep it at a constant temperature. The copper pieces were stuck down to vinyl tape and the suspended in the acid solution using masking tape – face down. 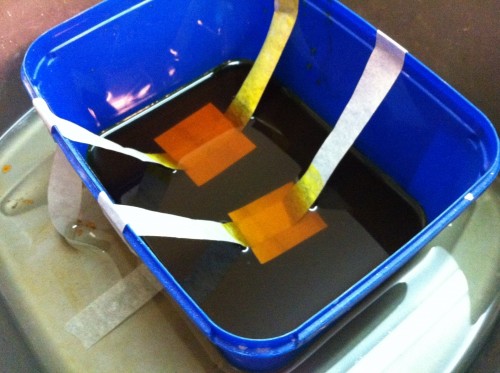 I had to agitate the solution every so often and refresh the boiling water in the bath so the acid was always warm. We checked how the etching was going periodically and then after 1hr 15mins decided that the etching was done and took the copper pieces out. They went straight into a tub of bicarbonate of soda – this neutralises the acid.

This is how the images looked when they came out… 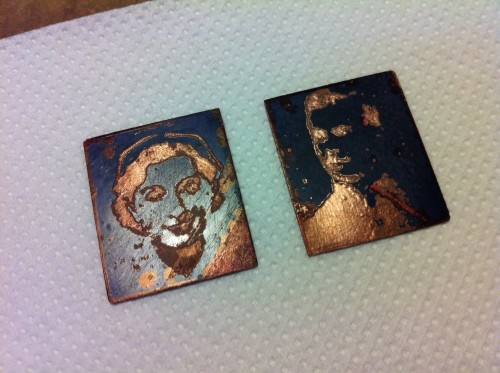 I’m loving them so far! 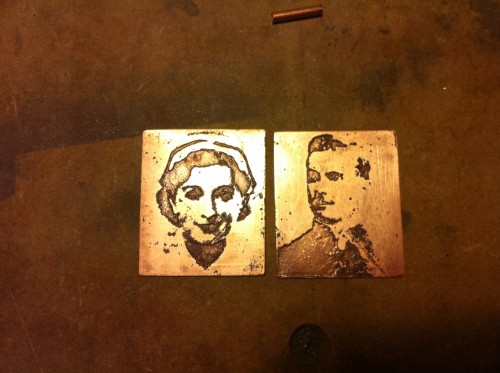 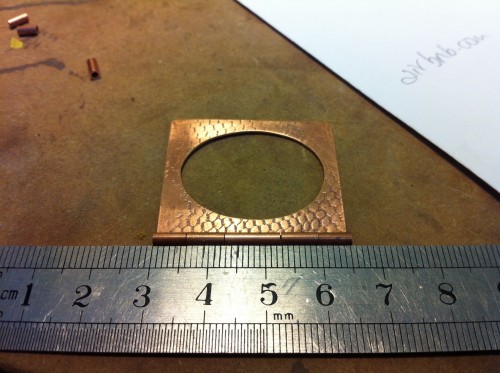 I’ll be doing the soldering next, without supervision (yikes), as my next block of classes doesn’t start until 16th April.