As I mentioned in a previous post, I’m venturing into new territory with some ideas I have for new pieces of jewellery and I couldn’t resist getting started yesterday. I want to move away from the a recognisable spoon bowl or stem and start working with the raw materials and shapes and see what I come up with.

There’s nothing I like more than bashing a piece of silver with a hammer and making loads of noise, but it’s not something I like to do when Milo is in the house, so as soon as Colin had him out the door for a walk with the dog, I leapt over to the bench and started working on texturing a couple of spoon bowls. What fun! This is the beginning of something new… 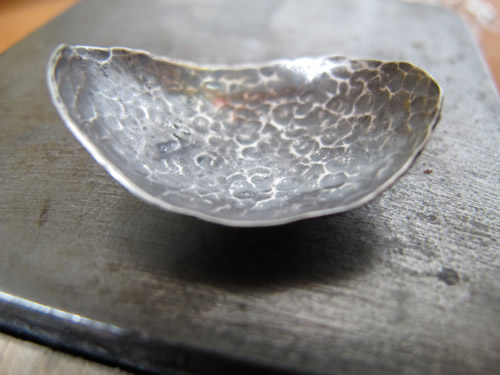 I didn’t take that many photo’s of the process from start to finish as I just wanted to get on with things and experiment and see what I came up with. It’s going to be a rivetted ring with an amber bead and I thought it’d be simple to make, but it’s been a logistical nightmare.

But I’ve managed to get this far: 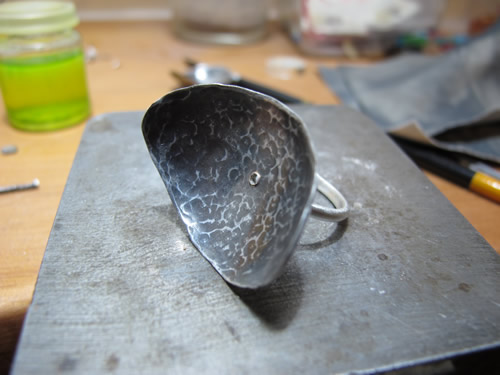 The textured bowl (not looking too spoon like I hope) and the ring both had a hole drilled into them for the rivet and then they were soldered together to give the piece some rigidity as I don’t think I could rely on the rivet itself to hold the entire piece together – I’m worried about the bowl rotating etc and that’s not what I’m after. So this part was a bit of a palaver! But I got there in the end. 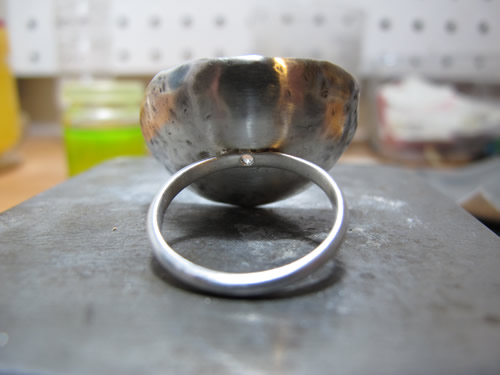 All looking good so far – it’s the next bit that puzzles me – no idea how I’m going to do the riveting on the inside of the ring itself – but I will figure something out I’m sure, break a few beads in the process and get really annoyed. 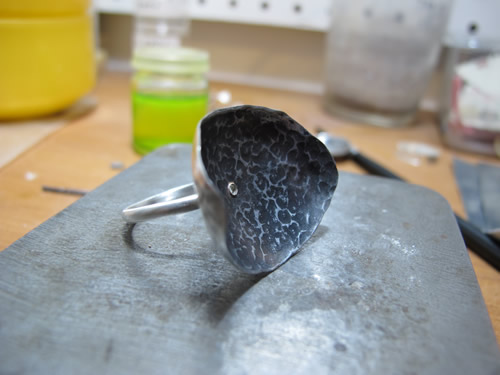 I already know how I’m going to adapt the design for the second one I’m going to make so this has a been a really useful learning process!

I’ll post up images of the finished piece – that’s if it works – once it’s done.