In August 2013 I wrote the blog post “Books I’ll never have time to read” about some books I bought at a local book sale. Guess what – it’s now beyond August 2015 and I’ve not read any of them! Shame on me!

Here are the books: 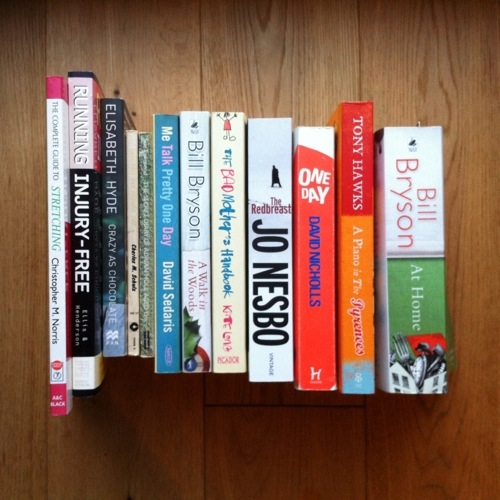 The two running books were left to gather dust when I quickly discovered my running days were over because of a dodgy knee.

Crazy as Chocolate disappeared in the void that is eventually going to be our library (currently full of DIY stuf and furniture we don’t need), as did the Snoopy book and Adrian Mole book.

I did start on the David Sedaris book, but then he did a series on Radio 4 and it was better listening to him that reading him and trying to immitate his lovely voice and intonation in my head.

The Bad Mothers Handbook was rubbish and I had to get it out of the house after just one chapter.

Jo Nesbo is on the waiting list as I’m trying to read his Harry Hole series in chronological order, so I’ve not got to this one yet.

I’ve no idea what has happened to One Day and A Piano in the Pyrenees – probably lost in the void too.

I used to devour books so quickly but since becoming a mum it generally takes me over a year to get one book read! I never really get any time to sit and read as I’m either busy working or totally exhausted from work, parenting and life in general. Colin has often found me fast asleep in bed clutching a book having only managed to read a paragraph before nodding off.

Do you suffer from the same affliction? Is it just down to the pitter patter of tiny feet? Or am I just useless? Have you read any of the above? Can you let me know if they were worth reading?